Raze-Perform Preworkout is the go to choice for anyone looking to smash PB’s and reach new levels of workout performance and intensity. Created with optimal doses of heavily researched performance ingredients, Raze-Perform combines cutting edge science with our insane tasting flavours to produce the best, specialist preworkout for high intensity workouts.
Be the first to review this product
Can’t recommend this enough! Amazing flavour and seeing real results in the gym. Lewis

Raze-Perform Preworkout is the go to choice for anyone looking to smash PB’s and reach new levels of workout performance and intensity. Created with optimal doses of heavily researched performance ingredients, Raze-Perform combines cutting edge science with our insane tasting flavours to produce the best, specialist preworkout for high intensity workouts. 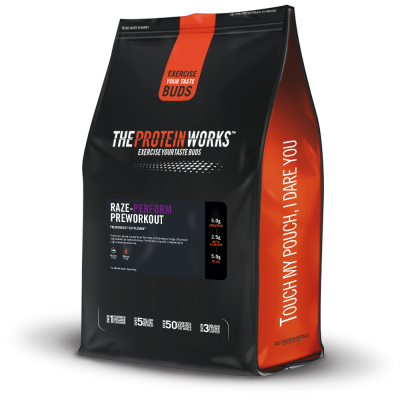 Skip to the beginning of the images gallery
Can’t recommend this enough! Amazing flavour and seeing real results in the gym. Lewis

Raze-Perform is what happens when you take an obsession with breaking physical and mental hurdles & then remove any limitations. What this philosophy produced was a masterclass in sports science and nutrition from our innovation department who worked round the clock to create the best preworkout specifically for high intensity and high performance. Each and every ingredient has been cherry picked for its effect on increasing workout capacity and how they interact with one another.

For example, we started with Creatine and Beta-Alanine, Creatine is without doubt the most heavily researched supplement in the sports industry shown to increase energy output over periods of short, high-intensity exercise. A solid start but where the magic really happens is when you combine this with Beta-Alanine. As Creatine increases your energy output, Beta-Alanine works synergistically to increase the levels of Carnosine in your blood, Carnosine then helps to buffer the pH levels of your muscles, clearing out any hydrogen ions in the muscles which can build up during periods of high intensity, inhibiting energy production. You can read more about the combination of Creatine and Beta-Alanine in our article here.

As you can see, our level of detail and obsession knows no bounds, so whether it is the BCAAs, Citruline Malate, L-Theanine or Caffeine you can be sure that each and every ingredient has been optimally dosed to research level quantities to create the best preworkout we could produce.

Who Is Raze-Perform Preworkout For?

Raze-Perform is the best preworkout for anyone looking to increase their levels of performance and reduce fatigue. Whether it’s a big game, a crunch match or just your Monday chest session, Raze-Perform is designed to elevate your workout capacity to new levels and keep you going for longer. Whilst a better performance is what everyone is after, if you’re looking for a weight loss preworkout, then Raze Burn will provide you the tailored sports nutrition you need to reach your goals. All of the Raze preworkout collection are made with our innovative Flavour Boost™ Technology. Flavour Boost™ provides a tastebud experience unlike any other, making our preworkouts silky smooth, mix to perfection and full of flavours that dance on your palette leaving you to focus solely on smashing your next workout.

What Are The Benefits Of Raze-Perform Preworkout?

Raze-Perform is our scientifically backed preworkout, with each ingredient dosed to research level doses, not simply the minimum levels required to make any sort of impact - like some inferior preworkouts you’ll find.

So what are the benefits of taking this preworkout?..

What Is In Raze-Perform Preworkout?

is just one of our many Pre-Workout Powders - Click here to see the full range.

* Disclaimer: Customer reviews are independent and based on personal experience. Individual results may vary. Products designed to be taken in conjunction with a balanced diet and training plan. Nutritional Information per serving based on Blue Raspberry Juice.

Read more
To maintain the integrity of our reviews we only let verified customers leave reviews. Please Sign In or Sign Up to review. Thanks!

Add 12.5g (2.5 x 5ml medum black scoops) to your TPW shaker and mix with 100-125ml of water to assess your tolerance. Shake well and consume about 30 minutes before your workout.

Add 25g (5 x 5ml medium black scoops) to your TPW shaker and mix with 200-225ml of water. Shake well and consume about 30 minutes before your workout.

Q. When should I use Raze-Perform?

A. We recommend taking Raze-Perform 30 minutes before your workout for optimal results and we recommend following the TPW™ dosage recommendations, depending upon your own tolerance levels.

Q. What are the main reasons for using Raze-Perform?

A. To provide a pre-workout energy boost to optimise an intense workout.

A. It tastes amazing! Raze-Perform has been developed with our Flavour Boost™ technology and is available in 2 incredible flavours.

Q. At what age can I use a product like Raze-Perform?

A. We recommend Raze-Perform not to be consumed by anyone under the age of 18 years old.

Q. Is Raze-Perform suitable for vegans and vegetarians?

A. Raze-Perform is not suitable for vegetarians or vegans.

Q. Can I use Raze-Perform with other supplements?

A. Yes. However, as Raze-Perform does contain caffeine within the blend, we recommend you don't take any additional caffeine from other sources alongside it.

Q. What if any side effects will I get from taking Raze-Perform?

A. Raze-Perform contains beta alanine, so you may experience a slight tingling sensation on the skin once consumed. This is perfectly normal and not harmful in any way.

Q. Who should take / benefit from using Raze-Perform?

A. As Raze-Perform is an evidence-based preworkout formula containing a range of proven ingredients at optimal doses it is perfect for anyone competing in high-intensity exercise.

Got a question? Ask an expert

We use cookies to provide you with a great user experience and top-class service. Simply hit OK to accept & continue optimal browsing, or read our cookie policy here and learn how to manage your settings
Tel: + 44 1928 571 677
Customer Services opening hours: 9am - 6pm Monday to Friday
Alla Rättigheter Förbehållna. THE PROTEIN WORKS™ is a trading name of Class Delta Ltd. Registered in England & Wales. Company No. 8170845